Jobfeed collects and categorises the online jobs in France and makes them searchable. The data in Jobfeed offer a lot of insight into the job market.  Jobfeed made an analysis about the first half of 2013.

Most jobs in Sales and Trading

In France, most vacancies can be found in Sales and Trading. 13% of all online posted jobs are in this profession class, according to Jobfeed data. Sales is followed by Production (8,5%) and Administration and Customer Service (8,4%). Remarkable fact: ICT has the sixth position with 5,8% market share. In other countries like the Netherlands (12,5%) and Germany (11%), IT is the largest profession class.

Most jobs in Île de France, most production jobs in Rhône-Alpes

When looking at the distribution of jobs per French region, it is apparent that more than one fifth of all jobs can be found in Île de France, followed by Rhône-Alpes (10%).

Per profession class, there are also differences between regions. While ‘Sales’ is roughly showing the same distribution as the total number of jobs, ‘Production’ is showing a completely different view. The graphs below show show the difference. Most production jobs can be found in Rhône-Alpes, followed by Île de France and Pays de la Loire. 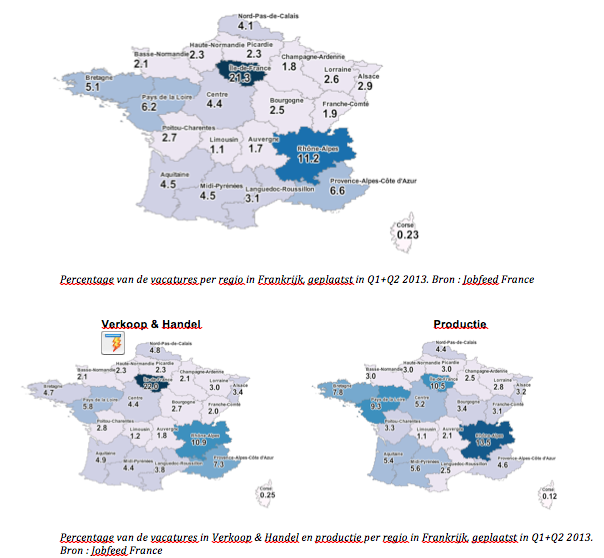 Job vacancies are often posted more than once. Jobfeed collects the online jobs and de-duplicates them agains job postings that were found earlier.

The graph below shows how often a job is advertised, compared to the average, per profession class.

Source
This analysis is made by monitoring 4.752.066 jobs, over 6.730 websites in the first half of 2013. This involves 2.304.065 unique jobs after de-duplication. The data is from Jobfeed France , Textkernel’s monitoring tool for the French job market.