Only recently, the Nursing and Midwife Council (NMC) reported that the numbers of EU and UK Nurses quitting the NHS outweigh the numbers of newly registered nurses (Oct 2016 – Sep 2017) causing its first drop of numbers in the last four years. The Department of Health expresses no higher concerns about these figures by stressing that it is “a mere 0,2%” decrease by ca. 700.000 registered nurses in the UK. However, NHS leaders do not share this point of view and describe these numbers as “alarming” since they already struggle to fill vacancies in respond to the continues rise in demand. But how exactly does it look on the demand side?

The relentless rise in demand for Nurses

In comparison to other European Countries ( Germany, France, Netherlands, Belgium) the UK has both the lowest number of nurses per inhabitant and the most vacancies posted online. The number of online vacancies between the year 2015-2016  and 2016-2017 increased by 17,6%, which assumably lies within the average compared to the other countries: Germany has the highest increase in demand, then Belgium, the UK, Netherlands and the lowest increase was found in France. However, with regards to the already high number of online vacancies for nurses in the UK, the increase of the total number of vacancies per inhabitants is the highest compared to the other EU countries of this analysis.

The high demand for nurses shown in this analysis underpins the concerns of the NHS. Upon an increasingly ageing and growing (last year 400.000 new inhabitant) nation this trend could have severe consequences on securing an appropriate healthcare system for the UK. 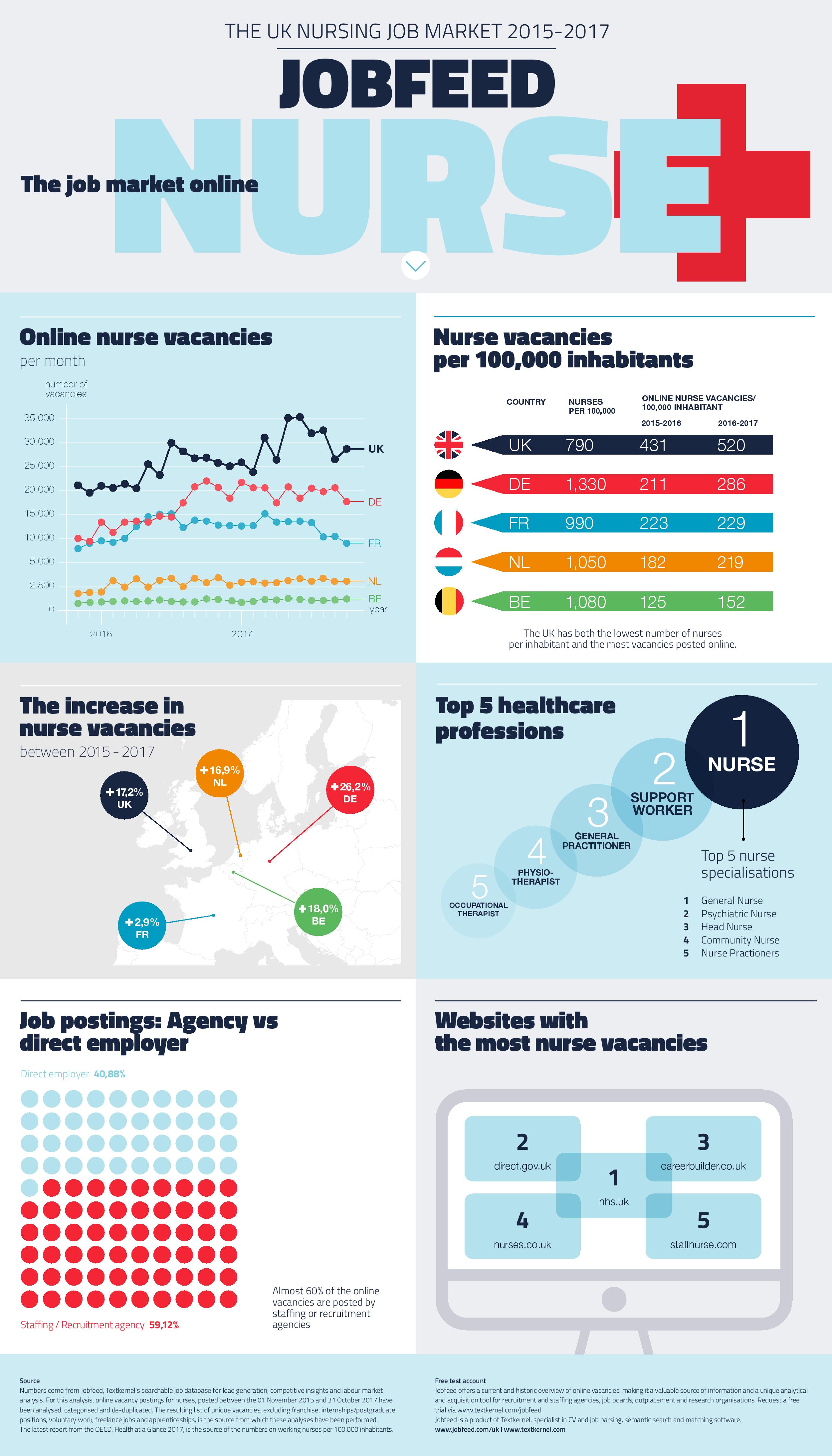 In order to gain insights into UK nursing job market online and it’s comparison to other European countries, we set out to analyse millions of jobs published online and collected by Jobfeed over a 2-year period in 5 European countries: UK, Netherlands, Belgium, France and Germany.

Thanks to the build-in Analytics module of Jobfeed we were able to quickly define the perimeter of the areas to be surveyed, de-duplicate repeatedly posted job offers and extract data from nearly 1,5 million unique jobs published between the 1 November 2015 and the 31 of October 2017.. The resulting list of unique vacancies, excluding franchise, internships/postgraduate positions, voluntary work, freelance jobs and apprenticeships, is the source on which these analyses have been performed.

Numbers come from Jobfeed, Textkernel’s searchable job database for lead generation, competitive insight and labour market analysis. Jobfeed offers a current and historic overview of online jobs in the UK as well as in Germany, France, the Netherlands, Austria and Belgium.

Jobfeed is a valuable source of information and a unique analytical and acquisition tool for recruitment and staffing agencies, job boards, outplacement and research organisations. For more information or a free trial, please visit www.textkernel.com/jobfeed.